🌞1000 beads and accessories for jewellery making are back! 🌞

Nacre beads are beads made of mother of pearl and they belong to the most prized natural beads for making jewellery. Nacre is produced in shells of pearl oysters and some other molluscs reared for their pearls. Since the sixteenth century, this noble material has been used in Europe for making decorations and ornaments. However, the most popular usage is making jewellery. In our offer, you will find a lot of nacre beads in the most popular light colours such as white and silver, but also some beads in less typical colours like brown, amethystine or green.

We recommend unicoloured and multicoloured beads in simple shapes such as barrels, balls, rectangles and squares as well as the beads in fancy shapes such as claws, beans, leaves and teardrops. Some of the most popular products in our shop are ready-made nacre pendants. They allow making beautiful, elegant earrings and necklaces without spending much time. We sell pendants in the shapes of wheels, stars, moons, fish and in other interesting forms. 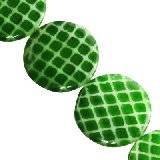 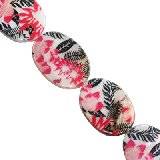 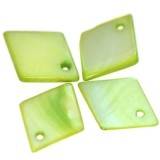 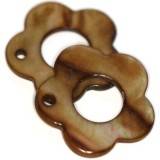 Jewellery made of mother of pearl

Mother of pearl for making jewelry is available in the form of small elements of various sizes and shapes. In our shape you can find both monochromatic mother-of-pearl elements and eye-catching multi-colored details captivating with enchanting color combinations. The monochromatic ovals and subtle tears with a rounded shape are very noble, from which the jewelery art will be able to create delicate and incredibly feminine mother-of-pearl bracelets, earrings or elegant necklaces. The rich color range of the presented pearly nuggets with a natural irregular shape makes the beads of nacre the perfect material for creating noble jewelry distinguished by unconventional design and fantasy. One-colored spheres, slender and elegant leaves and claws, which can be freely combined with each other, provide designers with inspiration, thanks to which unique pearl beads and pendants with original charm are created.

Multi-colored jewelry accessories made of mother of pearl

The most popular mother-of-pearl elements, however, include eye-catching, multi-colored accessories, with stunning patterns of colors and patterns highlighting the unique style of hand-made jewelry. They are available not only as small, oblong pebbles, circles or arrows, but also impressive, relatively large forms, enchanting with modern geometrical simplicity, such as squares and rectangles. A real feast for the eye are eye-catching multicolored spotted nuggets, as well as rainbow and decopauge, which among the lovers of original jewelry are an absolute hit for several seasons. By juxtaposing them with fancifully painted pendants of various shapes (stars, flowers or fish) and in combination with our jewelry blanks, you can create real jewelry masterpieces.

Mother of pearls for making jewelry

Mother of pearl is a natural, noble material used for decoration and jewelry for centuries. The possibilities that beads from nacre are made to create ornaments are infinite. They depend only on your imagination and creativity. The mother of pearl beads will make the bracelets, necklaces or earrings made of them extremely elegant and unique. A huge selection of colors and shapes of beads allows you to create a unique DIY jewelry. Our offer includes both delicate, light beaded colors as well as stronger and bolder ones. We offer single-colored, multi-colored beads and various shapes and forms. We also offer pendants made of mother of pearl with various interesting shapes. Thanks to them, you can easily and quickly create elegant earrings or necklace. Create interesting products and sets, combining them with other jewelry findings products. On our site you will find more. various glass beads, plastic, wooden beads, semi-precious stones and Swarovski crystals. You can buy the cheapest beads in our shop as well as necessary semi-finished products for making jewelry.